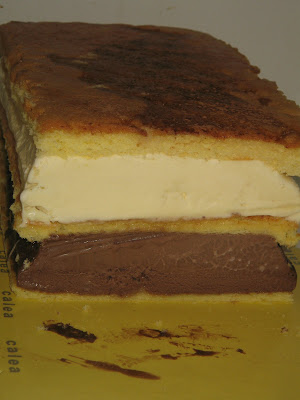 Negros Occidental, whose capital is Bacolod City, is an island of vast sugarcane fields. It is the country’s major cane sugar producer, exporting to other parts of the world.

Of course the industry had a major impact on the foodscape of the region. Traditional Negros products are guaranteed to induce sugar highs – piaya, butterscotch, napoleones, biscocho, baye-baye, pinasugbo.

After we were treated to dinner at Aboy's by my office colleagues in the Negros region, we were taken to Bob’s Café, across 21 Restaurant along Lacson Street, for coffee and some dessert. The display case contained cakes and pastries, but I can’t remember why nothing appealed to me. Which was strange - maybe they had all looked familiar and I was looking for something new, or maybe I was too full from all the tipay I had eaten.

A colleague wanted durian ice cream and ordered a pint, so I decided I’d just ask for a spoonful or two of it. Over the course of the evening someone mentioned that the ice cream cakes of Calea were much sought after by out-of-towners because, apparently, that kind of frozen dessert is rare anywhere else, or Calea’s version/s was/were much better.

I filed that information in the must-try section of my memory bank, and it was the first thing I mentioned when my long-time friend and Bacolod host asked the next day where I wanted to go. 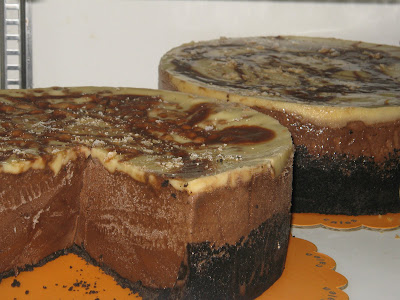 We went to the branch at Rob, short for Robinson’s Mall, which was a small affair, but cosy and very accessible. I was told ice cream cakes, so my eyes glazed while passing over the other cakes, and cleared only upon reaching the chiller containing the semifreddos. Which was unfortunate. 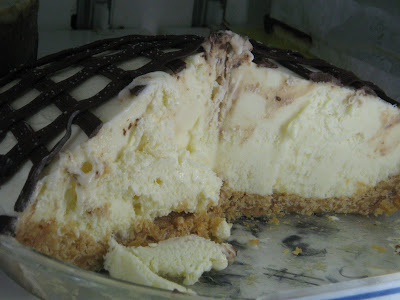 I could only order so much, after eating my way around Bacolod the whole day. What’s worse, my friend wasn’t into sweets, even though he was born and grew up in Bacolod.

It was regrettable that I only ordered ice cream cakes, because I didn’t like the quality of the ice creams. Not really poor, but not really awesome either. Just mediocre. One cake was rendered way too sweet it hurt my tonsils by the chocolate syrup, which wasn’t very good, too. 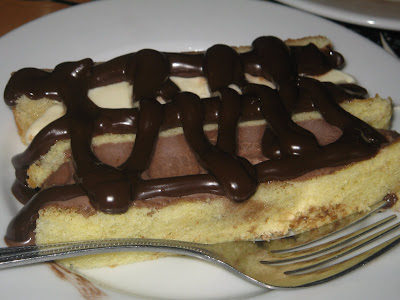 But all wasn’t lost. Upon leaving I bestowed a cursory glance at the regular cakes on display, and decided there must be more to Calea than the semifreddos. I couldn’t take in any more sweet stuff, but since I was going home that day I thought maybe I could bring some slices to share with the husband for dessert that evening after dinner.

I got a slice each of the white chocolate cheesecake with raspberry syrup and the “imported chocolate cake” (after having three outlets already you’d think Calea would be much more imaginative in naming their cakes) to take home, but I was aghast to learn that the cake slices would be put on a paper plate and slid inside a small paper bag.

Obviously, take out materials aren’t given much thought at Calea, and the owners don’t much care how their cakes slices arrive at their ultimate destinations. Maybe because they’re only slices? I couldn’t buy a whole cake that could have been put in a box because I wasn’t sure I’d like it, so just a slice to sample and a whole one for the next trip.

Alas, I had to hand-carry two cake slices in a paper bag all the way to the Silay airport, besides a mountain of assorted pasalubong, for the two-hour wait for my flight, which extended to three hours due to turn-around delays. So when I had the cakes on the dinner table at home they were less than presentable.

But oh my God. After taking a forkful from both all the lament I felt vanished. They were worth the effort it took, the worry it entailed, the irritation at the injustice of it. I just regret that they became unphotogenic so that all the photos I have here in this post are of the unimpressive semifreddos. 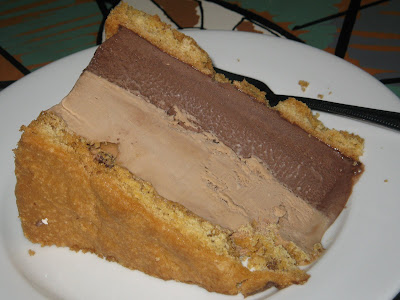 I had reservations about the cheesecake because I was told by a Calea staff that it wasn’t baked, so I was expecting it would melt during the flight. But it was baked alright, and held up nicely, even though it was deformed by my handling. The deformation didn’t in any way alter the taste, which was awesome.

As in awesome. There was perfect balance - salty, sour and sweet – between the cheese and the white chocolate, and the cake was dense yet crumbly. It had a very good, more than your ordinary graham, crust at just the right thickness, and the raspberry syrup was the crowning glory. Tart more than sweet, it complemented the sourness of the cheesecake, pairing nicely with the saltiness, and freshening up the sweetness.

The chocolate cake - the imported one - was purely first rate. It was soft, the chocolate mighty potent, the sweetness level restrained to a comfortable level. Now if only the same quality chocolate was used in the semifreddos. But I realize you can’t have all you want. So it's a whole cake - in a box - that I'm bringing home next time. And I'll ignore the ice cream cakes.

The Cake of the Month Series

Email ThisBlogThis!Share to TwitterShare to FacebookShare to Pinterest
Labels: cake of the month, food finds, malamis (matamis/sweet), out of town, restaurants

We should eat cakes together! I could finish an entire cake slice myself and I don't mind.