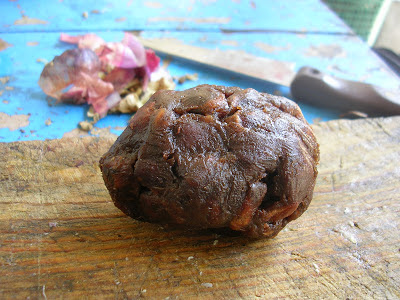 I go to the market every weekend, stocking up on fish and vegetables for the next seven days as I work during weekdays. I buy what is in season and what is abundant during my market days. Sometimes a variety of fish overflows all the bins that it sells so cheap, and I am prevailed upon to bring home kilos of it. This is why my husband buys me large two-door refrigerators with huge freezers (we've moved residence from one city to another a total of four times ever since we got married, leaving each ref each time to buy a new one).

When a fish is  at a particularly give-away price and my suki fishmonger tells me to buy two kilos, I roll my eyes and ask what will I do with all those fish shivering rock-hard in my freezer? And each time, I extricate a precious nugget of information on the stand-bys of local cooking. 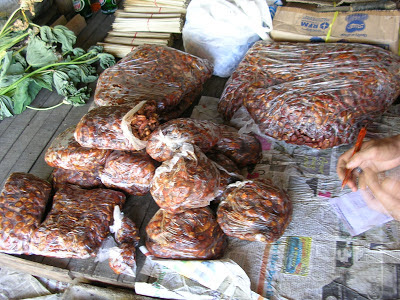 One that's repeated itself is this - buy kipil, and make pangat. I've had this advice for those pretty in pink dalagang-bukid, and for small round scad, allegedly the "real" galunggong, called galunggong lalaki in Cavite City.

And what is kipil? It is pronounced maragsa, accent on the second syllable. I've only seen kipil in Cavite City and nowhere else, but I'm sure every Filipino and most Southeast Asians are familiar with it. For it is not known by that name, and is not used like this. 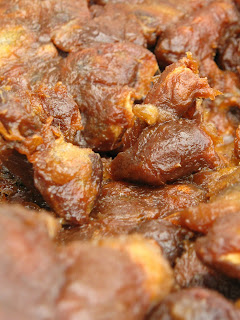 For kipil is the flesh of peeled ripe tamarind, or sampalok, lumped into a stony, sticky, gooey bronze mound that survives in open air throughout the year. This is the same ripe fruit made into those stony rolls of sweetened tamarind sporting cubed crystals of salt. Green, unripe tamarind is also sold when in season, but for sinigang. The kipil is more common, and is for pangat.

When I was new in Cavite City I was curious, but wasn't baffled, thinking Tagalogs like slightly sweetened dishes, having tasted their nilaga with corn or saba, or adobo with caramelized sugar. I was thinking, of course, about those sweet tamarind rolls. 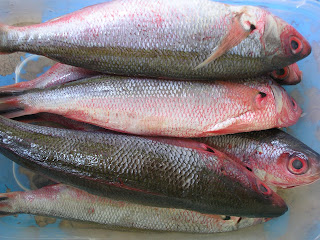 Two fish vendors had two methods of using kipil - the one selling dalagang-bukid said to wash the handful of kipil, and top it on fish boiling in water seasoned with soy sauce, onions and peppercorns. The galunggong vendor instructed me to manually dissolve the kipil in a pot of water and strain it into the fish, adding the soy sauce, onions and peppercorns and boiling like in adobo. 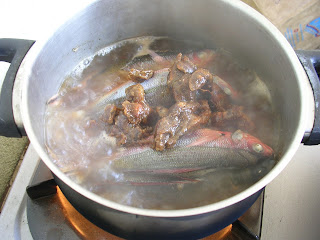 I am a Pangasinense, so I had to add a thumb of ginger peeled and diced, like we do with all dishes we cook. I tried both methods, and found that the dalagang-bukid version is tailored for that delicate fish. 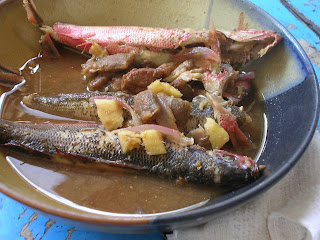 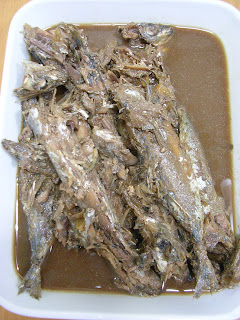 I prefer the galunggong way, though, as it imbues the fish, and the sauce, with the sourness of the tamarind that wakes up that collective national liking for tart dishes. But both kinds of fish do not lend very well to long cooking, disintegrating into spiny bones. 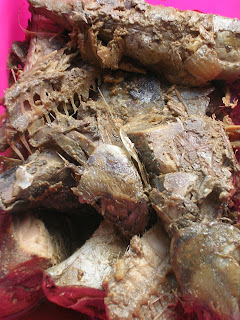 So I went out of my way and tried kipil with tulingan, which is ever-present in the public market at stable prices. Tulingan, after all, is famous in that Batanguena dish that stews seven hours in a pangat using dried kamias. Its firm flesh and thick bones are ideal for long stewing, absorbing flavors like sponge.

So I am now partly indoctrinated into Cavite cooking, but like most cuisines, my kipil dish is an inter-marriage of regional methods and ingredients. What I can't get over, though, is the intense sourness of the kipil. I grew up eating sweetened sampalok, after all, and I am psyched to expect that if it is dyed bronze it must be sweet. So while I was stewing the kipil and found it to be not a tad sweet I had to add a spoonful of sugar. It didn't really turn out to be a sweetened pangat, but it cut the sourness somewhat. And I found that I can be a Tagalog, too.

Kai, seriously please do a coffee table book about Pangasinan. Show it to publishers in the Philippines, share your talent to others in print. I want your book displayed in my living room table as a conversation piece for guests. There's no harm in trying. You have a regular job, this is only a hobby so it won't hurt to try. JK Rowling never expected her books would become bestsellers and turned into a movie franchise. As I said there's nothing to lose so please, please put this blog in print with bonggang- bonggang pictures.

hehe okay Anna thanks for the faith, I'll ask my husband to fund the endeavor :-)