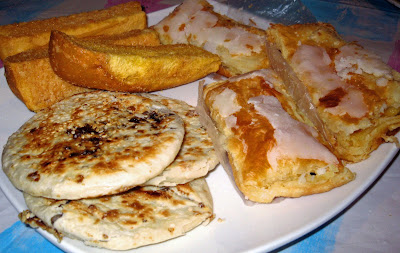 [BongBong's piaya (foreground) and biscocho (back), Roli's napoleones (right)]
It is just great how the internet connects people - bringing back lost friends or introducing new acquaintances. Ever since I started this blog I've had the wondrous fortune of receiving delightful food parcels from Asia Pacific, the US and Europe. Some of these parcels contained things I've yearned for for years, and uncannily the sender included these items without knowing about my secret wishes.

Of course even before that, I've had delicacies from around the country brought to me as pasalubong from friends and colleagues. If the pasalubong had not been food, they would have filled a large warehouse by now (of course I'm exaggerating). 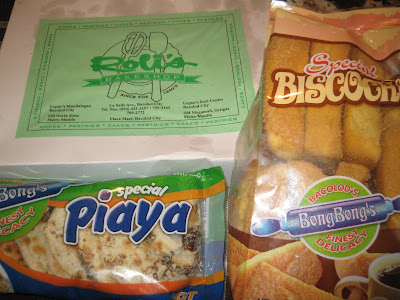 Just a few days ago I received a gift containing the best of that genteel Southern city - or at least what can be sent by airpost overnight - from a former blockmate in college. I half expected what was inside, thinking the sender had trawled this blog, but it also contained unexpected treats.

The main event was a whole box of Roli's napoleones, the real thing, about which I've written previously. They're longer than what can be commonly found in Metro Manila, brimming full of sweet, creamy custard.

The piaya are the kind that I like - flat, crispy when toasted, not so sweet, the generous topping of sesame seeds providing texture and contrasting nutty flavor. Another friend from Bacolod lives right next to a BongBong bakery, and the whole family is teased every afternoon by the wafting smells of baking piaya. She says BongBong's goodies are the craze in Bacolod these days, and the piaya is best eaten hot. I toasted a couple for breakfast, and I couldn't agree with her more.

The biscocho is a revelation. Biscocho Hauz' biscocho in Iloilo City has long been a standard. From Bacolod, I am biased towards Wewyn's. I bought my first Wewyn's biscocho at the pier, and have done so ever since, because Bacolod had always been between destinations, and I always go to Iloilo from Bacolod, by boat. The sugary, buttery, crumbly biscocho appealed to my taste.

BongBong's biscocho is in a class of its own. It's coated with sweet honey-like syrup, yet not so sweet, and it's soft to the bite. It's properly crusty, but does not generate a million crumbs that powder your chin and the table at every bite. Perfect with a cup of hot, dark chocolate, or milk tea. Mmmm.

Food From Different Places
From Abroad:
From Maryland, USA
From California, USA
From New York, USA
From The Netherlands and Portugal
From France/New Zealand
From Japan

Delicacies That Can Be Found Across the Philippines
In Dipolog City
In Baguio City
In Iloilo City
In Bulacan
In Camiguin
In Bacolod City
In Lukban, Quezon
In Cavite
In Naga

hello there....cant even remember i have eaten piaya
anyhoo now am slowly getting back to track of my life that went a bit derailed i can soon somehow plan a great culinary holidays when i travel to phils sometime

oh those parcels are treats i have received exciting goodies from others.

Hallo Sha! Good to hear from you!

please contribute at pag.wikipedia.org . Thanks.