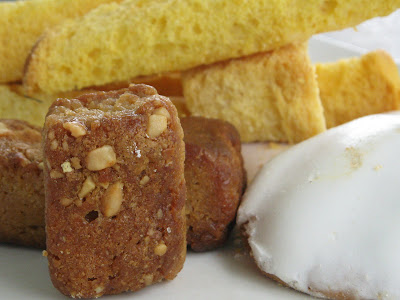 [Biscocho Haus' butterscotch, baňadas, biscocho]
Summer is, finally, fully here. It's been gathering its powers since the start of the year, but the gentle hanging amihan (northeasternly winds), cooled by the Siberian and Chinese winters, blowing over the archipelago was just too cold.

Now the slant of the earth at this time of the year puts the country at its nearest to the sun, so we get the maximum heat blast. It showers sometimes at night, but that doesn't do anything to dissipate the heat, but instead fuels the sun's anger more.

So it's now the peak of the travelling season. Travel usually starts at the end of the rainy season, about October at the earliest, with mild temperatures characterising December which makes it nice for hikes and walks. Domestic travel this season started in earnest during the two-week Christmas vacation last year.

However, last year's typhoon season was horrific, upturning and sinking boats and large ships, and producing ferocious funnels of tornadoes that it had not been a good time for island-hopping. And beaches during the last months of the year, and from January to February, are usually cold, places worthy of a visit are water-logged or mosquito-infested.

So the best time has just only started, just about now. Even though the sun is so hot it will melt your skin. I have come to buying suits with high UPF ratings for my kids, they who love the sea and sand as much as any Filipino, even though they are city-bred.

And of course any travel, Filipino-style, is not complete without the pasalubong, usually food that defines a certain place, bought for the office colleague or barkada or neighbor, to share the experience and partake of the place visited.

So I'll be featuring some noteworthy and economical (important when you have a lot to buy for) pasalubong during this season, picked up from previous travels, or hopefully to be brought from my planned travels this season, and also the pasalubong I've received/will receive from travelling colleagues, barkada and neighbors.

I have already featured quite a few, posted in the category abet/pasalubong (found in the sidebar), and my first two for this year were those peanuts you buy in Baguio but are actually made in Pangasinan, and my loot from Zamboanga.

This time I am revisiting Iloilo with the two most famous pastry houses in the city from which I bought my pasalubong, a spill-over of my one-day Iloilo trip.

Biscocho Haus is the most famous, with its chewy butterscotch bars, and of course its porous biscocho, slices of old bread sweetened and toasted. It has other cookie pastries worthy of hoarding in my own pantry, as pasalubong to my house - flavored barquillos, banadas, ube piaya, rosquillos. 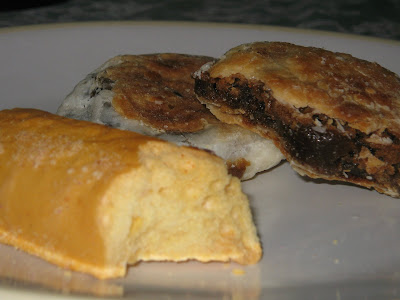 [Wewyn's biscocho, muscovado piaya]
The first time I was in Iloilo was when I had just finished my freshman year in college. I was with a group of friends, and we were enjoying the summer break. We took the ferry from Bacolod, having traveled the width and breadth of the island of Negros.

At the pier the first vendor who confronted us was carrying a pack of Wewyn's biscocho, crumbly, also porous, but held together by a spread of a creamy, sweet glaze on the surface of the toast. I have never forgotten that first biscocho, delicious and the best for me, and I never forget to buy Wewyn's to bring home.

During my last trip I did not have the time to drop by Wewyn's big outlet near the new humongous SM Iloilo, but good thing there is an outlet at the airport. As I was checking out the contents of the counter for other things to buy (got some good chocolate rolls - tsokolate tablea, too), the saleslady offered piaya - the original muscovado one.

It tasted great and was so fragrant, crunchy and crispy thin, the thick muscovado filling chewy and not overly-sweet. It was even better at home toasted and eaten warm. I think I had been munching on hybrid piayas for too long. The original is almost always the best, eh? 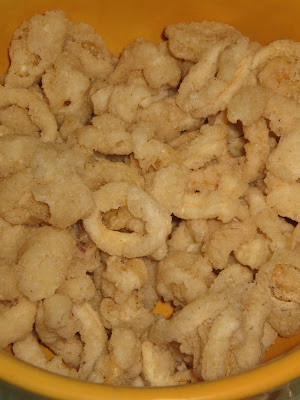 [Wewyn's Squid Rings]
My self-appointed, very generous and food-enamored host in Iloilo happens to be friends with Wewyn's owners, and he went to the factory to get packs of newly-cooked squid rings for me to insert in my luggage, which was already bursting at the seams that I was told to check it in at the airport and pay the corresponding fee (I was travelling on a no-check-in-baggage status).

He went all the way to the factory so he could have it discounted (Php75 per pack, while it sells at Php100 at the airport). The price difference is significant, because it is a must that these squid rings, lots and lots of them, be included in one's loot from Iloilo.

Made with real squid that peep out when you take a bite, it is one of those things that you put into your mouth then automatically reach for another, and another, until the plastic pack is empty and you open another one.

At the airport I opened one pack, and it was perfectly crunchy. If there had been vinegar to dip them in (there was none provided) I could have finished all the five packs I was given before I had even boarded my plane.

And when I arrived home? My son opened one pack, and was begging for another one a few minutes after. I told him to reserve one pack for his dad, who was due to arrive the next week.

But remember that TV ad where you leave a child with food (marshmallows) but admonish him not to touch it? I guess my son's emotional quotient had not been high enough. And I guess five packs of Wewyn's squid rings is not enough to take back home to the family.

What else to eat in Iloilo
Baye-baye
Public Market
Lunch: Nora's
Dinner: Breakthrough
Roberto's Siopao
Posted by Kai at 8:23 AM

i love biscocho from iloilo. my mother in law brought some for us. they lasted a day in our house. yummy! :)

our butterscotch of choice is PJ, a few stalls from biscocho house. Not overly sweet and so moist Heard they are friendly competitors as the owner of PJ is a cousin of biscocho house. At biscocho house naman, we hoard the pancit efuven noodles. They also serve it cooked in an adjacent restaurant. So linamnam!

Don't we wish the products are sold online?

During the many times I was previously in Iloilo our host would just actually bring us to SM (the small old one) and buy the butterscotch being sold there. I haven't come across PJ, but I'll remember that for the next time. And the pancit efuven, too.

i love butterscotch and piyaya!! :)

BISCOCHO HAUS is still the top Iloilo pasalubong shop. you shoulsalso try their buttered& garlic toasts and their YEMA. the latter almost upstaged their butterscotch when i brought them back a pasalubong before.

WEWIN is very synonymous with biscocho.though it many say quality has changed a bit esp that of the creamy glaze o nthe surface of its biscocho.

PJ'S butterscotch SURPRISINGLY almost tastes like that of biscocho haus and i cant even tell the difference.

RGIES is now the front runner among those who are trying to topple biscocho haus butterscotch.aside from being nicely packed its also dubbed as the gourmet butterscotch.

I considered butterscotch as the "IT", most sought after, most famous of all Iloilo pasalubong nowadays - lol. And for that I've reviewed 10 brands of ILOILO BUTTERSCOTCH in my blog hehehe

I also have pancit efuven entries too hehehe