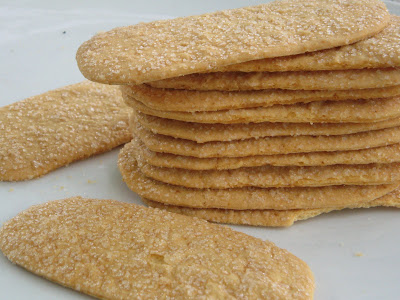 I am familiar with Southern Tagalog crunchies due to Metro Manila's proximity to the areas where these are part of daily life. A lot of officemates hail from there, who bring the munchies after weekend trips back home.

Less frequent though much savored road trips to Calamba, Los Banos and Lipa would have me eagerly waiting for the manongs who hail buses to peddle snacks onboard, carrying baskets stuffed with floury, crispy treats so different from what I grew up on in Pangasinan.

But during a trip to Quezon many years ago I discovered the "pride of Lucban," and ever since it set my standards for Southern Tagalog treats. Particularly for apas, that thin, sweet crisp that became a favorite.

Apas (accent on the last syllable) is not the plural of apa (accent on the first syllable), which is the term in Luzon for what is called barquillos in the Visayas. Apa is paper-thin wafer that come in rolls, or cones for ice cream - though the rolls are also used for the same purpose - flavored or otherwise, with a version filled with polvoron that is called barqui-ron. 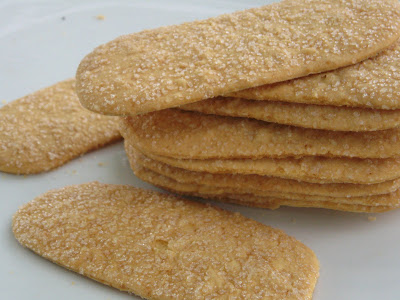 Apas - always with an "s" even though you're eating only one (though I think that's impossible, as I am bound to eat lots of it, maybe that's why it is always in plural form) - is also wafer thin but not pressed-thin, rectangular with oblate ends.

The version by Dealo, my favorite Lucban baker, has the perfect balance of crunch and floury density, and sports a glittering spread of sugar crystals. But it is not overly sweet, just enough an accompaniment to the toasted flour taste.

Dealo's apas is what I look for during regional trade fairs and food bazaars, but I always end up short. Rivals declare Dealo has gone out of business, offering me similar products by other purveyors.

So I almost somersaulted with joy when I found Dealo products in Lucena and Lucban during this year's Pahiyas festival.

Not only is Dealo very much still in business, it has international distribution, as well. Though that leaves me wanting - why should Dealo products be in Singapore, the US, Abu Dhabi and Canada, but not in Metro Manila?

I know the bakeshop chain doesn't have a line of Filipino biscuits, and in all honesty I don't patronize their very commercialized cakes and pastries. It is my fervent hope that Dealo stays in business, preserving the soul of Tagalog cuisine. 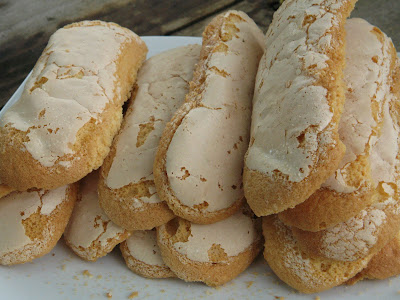 Dealo is known foremost for its broas, crumbly, spongy lady fingers, and I understand why. Unlike other versions that leave you feeling like you ate air, this has heft, the shape holds, and doesn't easily disintegrate. 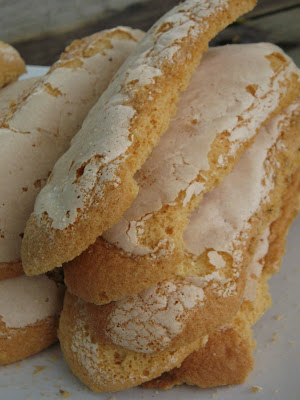 This broas isn't soft and cake-like, but bready and crisp, the glaze topping just an embellishment really - it's nowhere near as sweet as other broas.

It's also thick and large - my son observed they don't look like any lady's fingers. 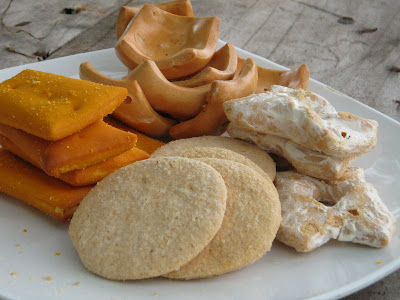 clockwise, from top - galletas, seňorita, romano, minaalat
A trip to Koffee Klatch was an educational one - a study in what Filipino pastries are all about. It was an opportunity to introduce the kids to native treats, they who grew up on chocolate chip cookies and shortbread.

Galletas I think are common elsewhere, and are sometimes labeled "egg cracklets." A write up about the biscuits in the Dealo website, though, seems to suggest galletas originated in Quezon, as a tribute to the bounty of coconuts in the area. The biscuits' shape resemble squares of dried coconut meat.

A senorita in the Philippine languages is a girl who is used to being waited on by servants. I've observed that local cookies and biscuits bearing the upperclass tag of senorita are finer, or enriched with pricier embellishments. Dealo's version is a ring-shaped egg cookie coated with a lightly sweetened sugar glaze.

Romanos are described as a kind of shortbread, but they are more like apas, with a "chalkier" texture, as in similar to an uraro or puto seko. The minaalat, purportedly "salted" because that is what the name implies, directly transported me back to my provincial childhood. They are eggy pillow cookies, their sweetness contrasting nicely with the underlying saltiness.

Dealo also produces great camachile. Not the common, bready camachile with the scalloped edges to imitate the fruit, but more like egg drop cookies that have been stretched into little fingers.

I love broas and apas!!! Broas, especially though. Love that they melt in the mouth. I'm going to get some when I go home :D

Galletas and Senorita remind me of life in the province. My lolas always had them on hand to serve guests.

This is the first time in decades that I have encountered these native pastries again. Somewhat sad that it is only through your blog, but grateful to you, nonetheless, for bringing back these childhood delights.

Leah, my lola always had biscuits in the can, too!

My daughter just came back from Pinas and I am blessed to have a sister in law from Lucban, Quezon. That's why while I'm enjoying reading this blog, I'm also enjoying eating my Apas and Broas along with a cup of 3 in 1 Maskape coffee....yummm!

Wow! Yes, you're right, these are great with coffee, or even native tsokolate!