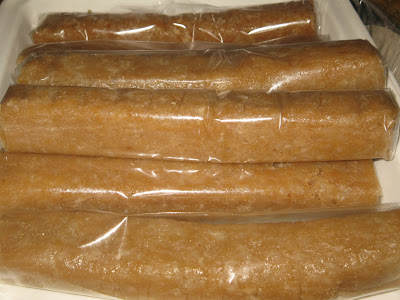 Baye-baye is this rice delicacy that's as common as sugar in Bacolod, yet is held in so high esteem that it is served on special occasions, and is so much a part of traditional celebrations.

Particularly on All Saints' Day in the island of Negros, tradition dictates that baye-baye is made, the preparation and eating shared by kith and kin converging in the family household, the departed loved ones even offered some. Probably just like our deremen in Pangasinan, baye-baye is particularly good at this time of the year because rice is newly harvested.

Bacolod locals have shared much about making baye-baye in the comments portion of these posts, and also in my post about Iloilo baye-baye.

To recap, glutinous rice (malagkit in Filipino, pilit in Hiligaynon or Ilonggo, the local language in Panay and Negros Occidental) is toasted, ground, mixed with sugar then pounded in a mortar til soft and pliant. Strips of young coconut can be added if a lot of visitors are expected so the batch of baye-baye is eaten within the day.

Ilonggos are one in saying that making baye-baye is backbreaking work, reason enough to make it only on highly regarded events, like Undas and Holy Week, when whole families make the trek to their provincial origins. 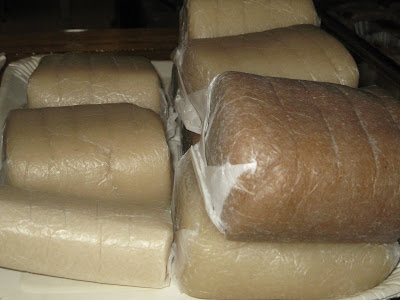 The baye-baye in Bacolod is distinct from the baye-baye in Iloilo/Panay in that it comes in many shapes, as well as in color and texture. And in Panay a short strip of highway along the road to the international airport in Pavia is where baye-baye can be found. In Bacolod, it can be anywhere, though the delicacy runs out by noontime in both sides of the Bacolod Channel.

In Iloilo baye baye is backbreaking work because rice is roasted twice.
1. Harvest malagatas or about to mature malagkit. You can test for this by crushing, when thick white fluid bursts forth from the rice kernel, then it is OK to use.
2. Roast the rice. Have it hulled by the mortar and pestle, but I think it can be hulled by machine in the arocera.
3. Roast the rice a second time. When slightly browned, mill it into rice flour. This is light brown and fragrant.
4. Mix with red sugar or muscovado and tender young coconut meat, and pound away in the old lusong (traditional mortar and pestle). This is the step where you would get blisters in your palms.

Wow, thanks for sharing!

I really love baye baye and I can't believe so much work has to go to make it. Makes it really worth the eating. I just finished one just now as I asked my friends who just arrived from Bacolod to bring me some. I planned to make it but it looks very tedious so I guess I'll wait for them to go back to Bacolod soon. :-) Thanks for this post.

Yes, native delicacies are usually a labor of love involving entire clans, and even villages.

my great grandparents who were from Iloilo and settled down in mindanao decades ago said that it's named "bayebaye" because it's often the men who prepare it because of the tedious job of pounding the ingredients in the lusong.

Thanks for that valuable information, Gigi. Isn't baye the term for girl in Ilonggo? So it's in homage to males then?