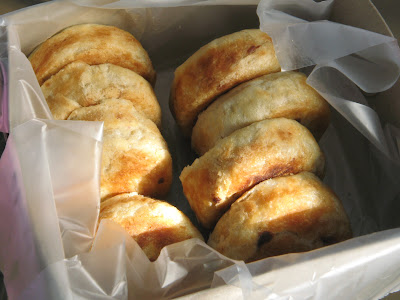 This is part of an ongoing series, "Tinapay," about local breads and cookies at street corner bakeries across the Philippines.

Newbies, tourists, or simply visitors to Puerto Princesa will invariably, as I had, hear about Baker's Hill.

This is not a hill where bakers converge, or a place where you can find a mountain of baking paraphernalia. It is a bakeshop, situated on a ridge that could well be considered a hill, along millionaire's row in a far-flung barangay in Puerto Princesa City, in the charmed island province of Palawan.

Other visitors to the city told me, during that dream-like, 3-week family vacation mid-summer of last year, that Baker's Hill is a home-grown bakeshop so successful that it has already ventured out with a branch in Metro Manila.

When we did get to the place, one Sunday afternoon, there were a lot of vehicles parked along the road, and needless to say it was bustling with people. But we found that it was a kid-friendly establishment, well worth the half-hour or so trip from the city.

We went inside the complex to enjoy the funny fiber-glass statues, a mini zoo showcasing Palawan fauna, mini playgrounds, and an extensive cactus and bonsai garden and nursery, from which you could purchase whatever catches your fancy. After we've toured around and the kids were enjoying the playground I ventured to the bakery.

But by then I was too late, and most of the baked goods were gone, or only a few pieces of each were left. Gathering all that were still available, I noticed that the price tags had the label Ribonettes marked on them. And when I sampled the hopia, it tasted exactly like that Ribonette hopia sold by the cardboard box in many bakeries and streetside stalls around Metro Manila.

So I became curious. Was the home-grown tale true, or was it the other way around? The sales staff were vague, but the replies indicate that Baker's Hill was opened in Palawan after Ribonette had been established (I'm not exactly sure where, but it seems to be somewhere in Taguig).

It was either the owner of Ribonette became enamored with Puerto Princesa that a branch was put up there, or the owner of both bakeshops is a Palawan native who went to Manila and then went back home, putting up bakeries in both places.

Anyhow, if this is the real connection, it shouldn't deter those who have tried Ribonette's hopia (they're not exactly a must-have pastry, if you know what I mean....). Because at Baker's Hill the breads and pastries are the best one could find in the city.

The softest, most aromatic pan de sal and its variants (Spanish, filled with tuna, adobo, chicken curry, etc.), a pianono as long as a sword, flaky rolls, an ensaymada ring topped thick with heavenly grated chocolate, a cuddly-soft mamon.

There were a lot of products I wasn't able to try, as most bins were empty, but I am of the belief, based on what I had tried so far, that they would be splendid (except for the hopia). Certainly a far cry from Ribonettes products, and definitely superior to the offerings of most well-known bakeshops in Metro Manila.

Sadly, I lost all the photos I have taken, of the breads and the other attractions of the whole Baker's Hill complex (except for the hopia above, ironically!), when my laptop crashed and had to be reformatted. But there are many photos abounding in the internet, and there is one particular site (link here) where the photos mirror, to a certain level, the ones I took.

And of course, I'm counting on the "come-back come-back " legend ascribed to Palawan, for the time I could spend another vacation there, and visit Baker's Hill again.

So for those planning on a visit to Puerto Princesa, don't forget to drop by Baker's Hill, and try all the breads. There are souvenir items on sale there, too, like shirts, pearls and glass beads accessories, next to the bakery that wafts the so comforting smell of baking bread.

No ATM in sight for miles around the area, so bring a lot of cash (credit cards not accepted). Baker's Hill can be included in the itinerary when going to the crocodile farm, the butterfly garden and the Mitra resthouse.

The view along the ridge is awesome, the houses are nice (including the mansion at Baker's Hill), plus watch out for that signboard announcing "This is the mansion of so-and-so," which several in our company wanted to tear down (he has got some nerve!), but I told them it would provide many a funny moment for other visitors after us, so they let it be. ;-)

Going there is an uphill climb, and no PUVs ply the area. It is near the butterfly garden, and along the road going to the Mitra house.

Actually, the owner of Baker's Hill is the owner of the Ribonette's Bakeshop in Taguig. The history was, the bakery was owned by a family from Taguig, when the parents died, the children separated and made bakeries, Ribonnet was the more successful of the sibs. The owner has a property in Palawan that's why they opened a branch there.

The hopia is good, specially the "hopia baboy", the tip is to buy it directly from the bakeshop rather than the sidestreet stalls. At the bakeshop it is always freshly baked therefore you get the melt-in-your-mouth experience of the hopia, which is what you are really after.

They make different kinds of cookies and cakes too, my favorite is their crinkles which is chewy, moist and chocolatey, not like the teeth-breaker-dried-out crinkles in some bakeshops.

I'm not connected to nor a representative of ribonnetes or anything like that, just love their baked goodies. Actually I'm currently munching one of their choco-oatmeal cookies while I'm typing up this comment :)... yum!
-Marjorie of Pasig

Hi Marjorie, thanks so much for the input! I wish I could go back to Palawan soon! But maybe I'd drop by Ribonette's instead. ;-)

My son and I just got back from visiting Palawan; our first time visit there. The pastry that I tasted at Baker's Hill was sooo delicious that I'm online right now finding out if the bake shop has a website for me to order. Yes!, the "crispy outside, and surprisingly moist and soft inside" hopia, the crinkles (sweet and chewy), and piyaya.. first time for me to taste such unforgettable texture and "just the right" sweetness of it.

Oh, I wish I get a taste.. no... a bite of these pastries here in Hawaii. If anyone know how... please the information...

Anybody knows the phone numbers of Ribonettes in Tipas?

Hi Marjorie correction lang po their parents are not yet dead.

Hi there, thanks for the clarification and the contact number for Ribonettes.